Baggböle covers the entire medieval village of Baggböle: the eastern area closest to Umedalen and the western area next to Baggböle Manor and its surroundings (approx. 10 km from downtown Umeå).

The area stretches down towards the Ume River, westward along Arboretum Norr, and eastward to the island Baggböleören.

It has several interesting sights with posted information signs.

You can reach Baggböle by car from the E12, from Sockenvägen road, along the river’s walking and cycling paths, and from the Notvarpsbron bridge from Umeå Energicentrum in Klabböle.

There are a number of stops and picnic areas along the river, and coffee and meals are available at the manor.

In the mid-1970s, a plan was drawn up to create the world’s northernmost botanical collection, an arboretum, in the village of Baggböle outside Umeå. Today (2016) the 16-hectare area is home to almost 400 species of trees and bushes from all over the hemisphere. In total, there are 2,400 planted trees and bushes in the Baggböle arboretum.

It is a popular recreation area and a wellspring of knowledge for students and visitors.

The manor was designed in 1846 in Empire style by Assistant Vicar Johan Anders Linder of Umeå. It was completed in 1847 and was the home of the owner of the Baggböle sawmill.

Two detached wings, two gazebos, a skittle alley, a school, a fee mill, a large hay-drying rack, a barn, stables and three gardens with plants and potatoes were built around the manor. The manor was owned by Umeå Missionsförsamling from

It now houses a restaurant and offices.

Read more about the history of Baggböle manor. 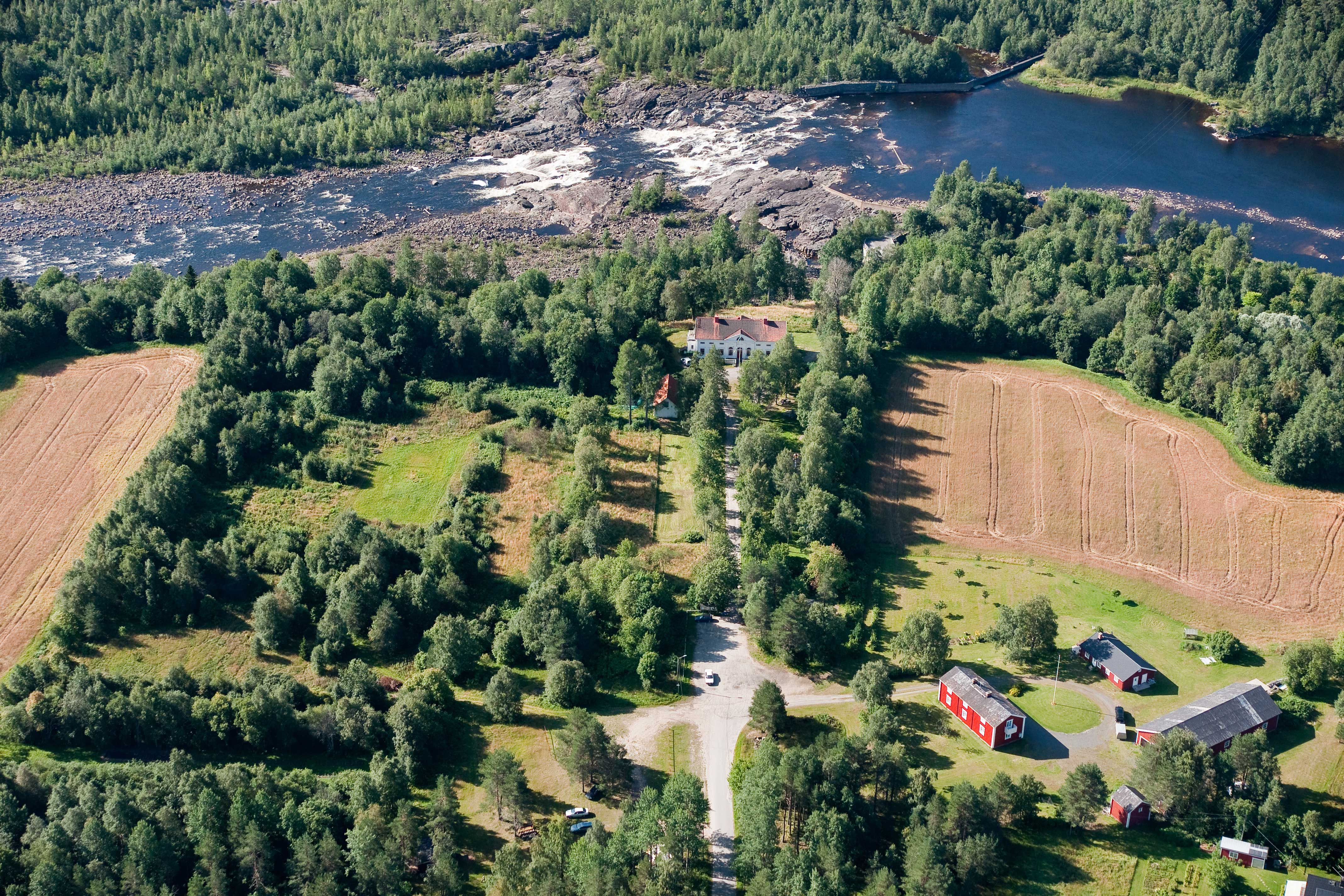 Baggböle power plant with “The Buddha”

Egil Unander-Scharin bought Baggböle sawmill in 1897. The seller was Svartviks AB and the purpose of the purchase was to build a hydroelectric plant in the Baggböle Rapids. But in 1900, Holmsunds AB bought the shoreline and water rights on the Baggböle side of the Ume River.

Baggböle power plant was built in 1916 by Holmsunds AB and supplied electricity to the Obbola factory via a 22-kilometre-long cable with a 40,000 volt capacity.

In 1947, the City of Umeå bought the land and the power plant. The power plant was torn down when Stornorrfors power plant became operational in 1958. All that remains of the plant is a concrete foundation and wetlands. Two large holes inside the plant show where turbines spun to produce electricity.

Read more about the hydroelectric plant and artwork 811 with “The Buddha”.

The new sawmill in Baggböle was permitted to have four frame saws and to fell 2,883 trees.

In 1840, the sawmill was acquired by the Gothenburg-based James Dickson & Company, and under their leadership, the sawmill became the county’s largest industry.

Kåddis – dating back to the Middle Ages

The village of Kåddis has been recorded in historical sources dating back to 1324, when a certain Johannes and his wife, Cecilia, donated a homestead in Kåddis to the Uppsala Cathedral on condition that the archbishop approve the inheritance claim of Cecilia’s brother, Jerud in Hiske. In 1346 Könik Skarlakan acquired property in exchange for land he inherited in Uppland.

The medieval settlement was located south of the current village. In 1543 five farmers lived in the village, and the same number were there in 1750. With the redrawing of farm boundaries in 1846–47, the village had seven farms. Next to the village there were three permanent fishing buildings.

During the latter part of the 19th century, the village expanded, and during the 20th century, several dwellings, such as private houses and villas, were added.

The County Administrative Board has classified Kåddis as a village of national interest for cultural heritage conservation.