Already in 1543, Sörfors had seven homesteads and was one of the larger villages in Umeå Parish. Around 1750, the village had 10 homesteads.

Indeed, Sörfors was one of the largest of the upper river valley villages and by 1883, it had 43 homesteads and three soldiers’ cottages. In this context, new built-up areas emerged south and southwest of Ön and by Kvarnsvedjan.

Sörfors village is south of the Ume River; the oldest part was just south of Norrforsen and in the northern part of the Sörfors side.

The area is 50–100 metres above sea level and is distinctive for its hilly terrain. The adjacent area is characterised by the Stornorrfors power plant dam, as well as embankments and backfill.

The first bridge across the Ume River was built in 1800 between Sörfors and Norrfors. It was soon damaged by clearcutting in the northern slope, but was repaired in 1803–04. However, in 1809 it was burned down during the Russian-Swedish war on the orders of Swedish General von Döbeln. It was not rebuilt until the 1870s. The bridge was torn down in 1911 in conjunction with the construction of the current bridge, which was underway from 1910–1912. A stone pillar still stands in memory of the oldest bridge across the Ume River.

In its inventory from 1982, Västerbotten Museum selected two areas with buildings of historic value.

Area 1 encompasses the western section of Sörfors, with the village’s oldest centre. It is bordered to the north by Norrforsen, to the west by the river Tvärån, and to the east by Överbodavägen road. There are older built-up farming areas here, and most of the manor houses have undergone major renovations. The area is home to a well-preserved cottage from the mid-19th century. Facilities from the era preceding the Norrfors power plant remain in the form of worker housing for Vattenfall.

Area 2 encompasses the entire eastern part of the village, east of Överbodavägen road. The more built-up area here emerged with the power plant’s construction in the 20th century. Services such as a school, preschool, a day care centre and a chapel can be found here.
The built up area contains a blend of older farm cottages, and large and small barns and sheds with single-family homes from the 20th century. Farms are sprinkled throughout the village. Sörfors is an important area of national cultural heritage.

Several giant kettles can be found by the old bridge pillar upstream from the bridge at Sörfors.

Giant kettles are formed by the grinding effects of sand, gravel and stones spinning around in eddies of swirling water. The stones or boulders left behind in the bottom of the giant’s kettles are usually perfectly round; they are called löpare in Swedish, meaning runners.

In some parts of the Nordic region, giant’s kettles can have a diameter of 8–10 metres, with a depth of 20–30 metres, but the ones in Sörfors are much smaller. 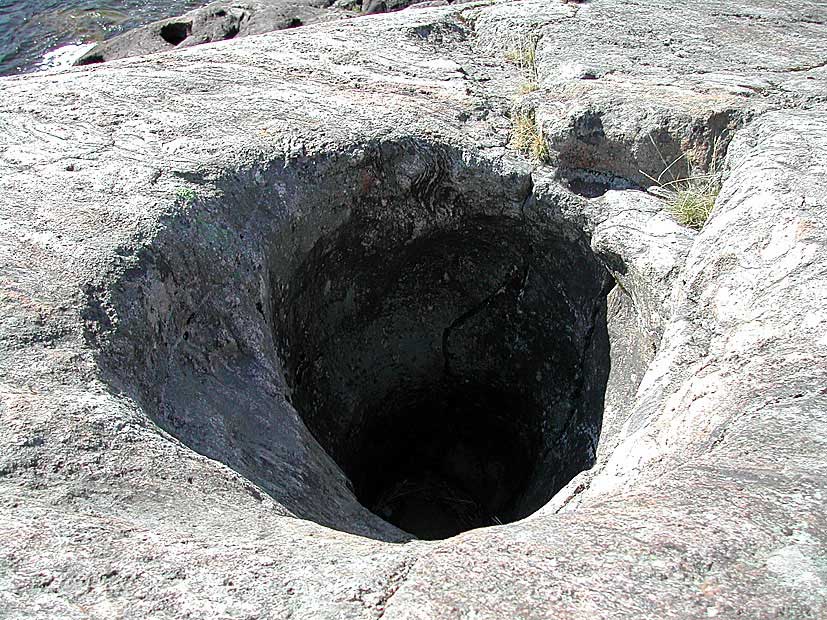 Over the years, Sörfors has had three different bridges. The first bridge over the Ume River was made of wood and built between 1800–1802.

However, it was not there for long. On 24 May 1809, on the orders of Major General von Döbeln, the bridge was set on fire to prevent Russian troops from gaining ground. But these efforts did not help much, because the Russian troops crossed the river in Umeå by ship.

The loss of the bridge was a great disappointment for the village, but they received a grant of 1000 riksdaler from the Crown for its destruction.

To regain the money spent on the bridge construction, a fee was charged for crossings and a bridge guard manned the gate. The stone pillar upstream from the current bridge is a relic of the second oldest bridge in Sörfors.

The current iron bridge was built in 1910–1912. Stone for the bridge foundation was taken from Klabböleberget, and Götaverken built the span. The bridge is fastened with rivets and is not welded.