Böle village is a medieval farming village at the southern shore of the Ume River. In the 17th century, Böle village split into a dense village centre to the south and a sparse line of farms along the river.

Manor farmhouses were built in some areas, such as the Böle lieutenant colonel residence, built in 1694 (read more below).

In the late-19th century, the eastern network of homes in Böle served as military housing and all that it entailed, which prevented the development of Böle village to the east towards Teg. 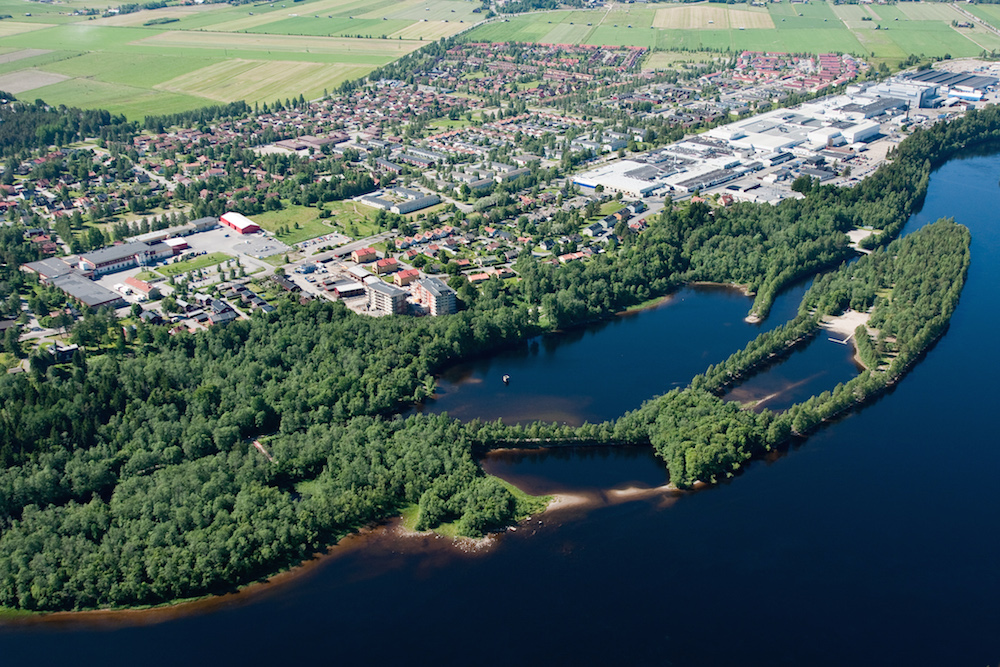 Along the southern shore of the Ume River and within view of downtown Umeå are the lush Bölesholmarna islands, a perfect destination for a short excursion. There is also a sandy beach ideal for families with young children, wind protection and plenty of grills.

A destination for the whole family! This oasis is within walking and cycling distance from downtown Umeå.

Camilla on Bölesholmarna: “This place is a gem if you don’t want to travel very far. It’s calm, peaceful, super pretty and a hundred per cent car free.”

Until 1980, logs were floated down the river and several booms were placed along the river since the area around the islands served as timber storage.

There were raft huts and a suspension bridge whose foundation could even be seen on the island Gröna Oxen. Visitors can also see other evidence of the logging industry such as cables, logs and concrete constructions.

The park area nearest the Böle channel between Körsbärsdalen and the western footbridge to the Bölesholmarna islands is called Böle Strandpark (beach park).

When Charles XI past through Umeå in 1694 to inspect how the newly established allotments were working out, the king decided that for Västerbotten, the lieutenant colonel would live in Böle. The home was built in 1696.However, the building burned down during fighting in Umeå in 1720.

The current manor house, which is the third on the same site, was built based on plans by P. Adelcrantz in 1760.

The original building was single-story with a gable roof and four chimneys. The central axis of the house included an entrance hall with stairs leading to the attic storey and a drawing room.

The first major change was made in the 1770s, which is probably when the roof was given its mansard design.

The frontispieces and gable doors date back to pre-1865. The entrance hall was expanded in 1866 with a staircase to the attic storey. Renovations took place from 1934–37, when the entrance hall was given its current appearance, with the balcony supported by pillars.

The Böle residence was used as military housing until 1897; then it came under the management of the Västerbotten Agricultural Society and hired out to leaseholders. The property has been privately owned since 1934.

A raised shed located on the property was built in 1837.

The Böle residence has been a listed building since 1975.