A new sawmill was built in 1842 and two more frame saws for edging were approved. During the 1840s, 7,511 trees were felled annually.

Baggböle Manor was built as a home for the sawmill manager in 1846 on the river’s edge above the sawmill (see below).

From the sawmill, timber was transferred via a wooden aqueduct to calmer waters by Klockarböle. From there, the logs floated “partly by means of rowing and partly with help from the wind” in bundles about 20 kilometres to the wharfs in Degernässanden, Småholmssundet (Holmsund), and Västerbacken at the mouth of the Ume River. In 1848, a better wharf was built at Småholmssundet, which was named Holmsund. After the logs were floated down river to Holmsund, they were washed and stacked.

In the early 1850s, the company was granted permission to transfer the felling rights from the other Norrfors sawmill and from Nyby byamän’s one-frame sawmill to Baggböle sawmill.

Another sawmill was then built in Baggböle. The total number of saw frames was 16. The new lower saw shared a mill pond with the upper saw.

There were bridges on the western sawmill gable, while the eastern gable had two “rails” for pushing out boards and planks. The northern side had a bridge for carrying boards and – from the centre bottom – one bridge with iron rails, on which the wood shavings were carted to the incinerator. Boards and shavings were burned in special fire pits. The mill area also had workshops, a smithy, an office, a coal shed, and a fee mill. The older houses for workers were situated by the sawmill pond.

About 170 workers, excluding women and children, were employed at the wharf and both sawmills. Operations ran from May to late October.

The number of trees felled increased on several occasions and reached 20,040 trees in 1855. In the late 1840s, the company had the right to cut down 3,200 trees on state-owned land annually. Their allotment was not sufficient for the expanded capacity of the sawmill. Like so many other sawmills, Baggböle exceeded its felling rights as farmers were encouraged to increase their timber deliveries.

Baggböle was taken to court several times for illegal felling. The sawmill’s name became synonymous with a concept with very negative associations: baggböleri, which refers to illegal felling.

In Baggböle, about 150,000 logs were sawn annually and the company expanded its access to timber by purchasing forestland. Logs were floated up to 240 kilometres and could took up to three years to reach the mill.

In 1885, the company established a steam-powered sawmill on the wharf in Holmsund, and dicommissioned the water-powered sawmill in Baggböle. Steam-powered sawmills had much more capacity, as they could be continuously operated. One of the 16 fine-blade frames in Baggböle was bought by Johan August Lindgren, who transported it to Risliden in Vindeln Municipality. It was given by his daughter’s son, Axel Ohlsson, in 1951 to the county’s local history association, which moved it to the sawmill in Holmsund with SCA’s help.

In 1991, the saw was moved to Energicentrum in Klabböle. It has been renovated and is now in working order.

Holmsunds AB had also planned a pulp mill in the Baggböle Rapids in 1902, but built a sulphate plant in Obbola in 1911–1913 instead. 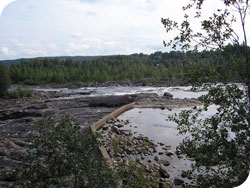 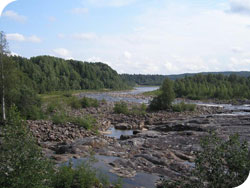