Klabböle village is located a few kilometres west of Umeå, on the right-hand/southern shore of the Ume River. In prehistoric times, the sea reached all the way to the surrounding mountains to the south, with bays pressing into the valleys.

The name of the village was in use from the 16th century and is believed to refer to a cow collar, a new garden or a new building. The village was probably built in conjunction with the colonisation of the coast of Norrland, which took place in the 13th and 14th centuries, when the shores along the major salmon fishing rivers were populated.

The built-up area was placed as closely to the riverbank as possible to facilitate fishing, and below the rapids it was possible to cross the river to the parish church and the villages along the northern shore. There was once a ferry dock in Klabböle.

The built-up area and selions (strips of land) were claimed at the top of the plateau which formed between the riverbank to the north and the ravine to the south. The risk of frost was lower here.

Down by the water and on the slope along the brook, natural pastures and hay fields could be accessed.

Salmon traps were built in the rapids with stone tubs. Boats and fish buildings could be destroyed when the spring flood was especially powerful, which happened between 1721 and 1756.

According to the land register of 1543, 8 farmers lived in Klabböle at this time. The village was home to 10 farmers in the 1750s. A scattered collection of houses sat by the river and a few farms were on the riverbank. Two mills were situated in the current Raningsbäcken in the 18th century.

With the 1876 land reform, the community became increasingly dense and new buildings emerged a few hundred metres west of the old village centre, on the village’s common land. 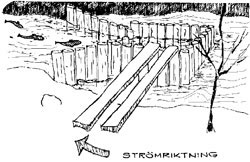 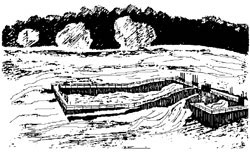 Land reform led to seven farmers moving away; most of them would settle in a new area just a few kilometres northwest of the old village. This new built-up area was named Överbyn (“upper village”), while the old village centre was called Nerbyn (“lower village”).

Klabböle had smokehouses for smoking river lamprey. They are all four-corner timber buildings with a gable entry and gable roof.

The area still has some fishing-related buildings. The smokehouses in Klabböle are unique. Klabböle, and to some extent Baggböle, are the only Västerbotten river valley villages that are still home to these types of buildings. The sole purpose of the smokehouses was to smoke lamprey, the official fish of Västerbotten province, where lamprey have long been vitally important. Today, 18 smokehouses remain in Klabböle and they are designed relatively uniformly, with four timbered walls and gable roofs. There are some differences in size and angles. One reason why they all have such similar designs is that this construction produces the proper balance of smoke and heat.

In 2008, seven of the 18 smokehouse were restored with funding from the County Administrative Board. 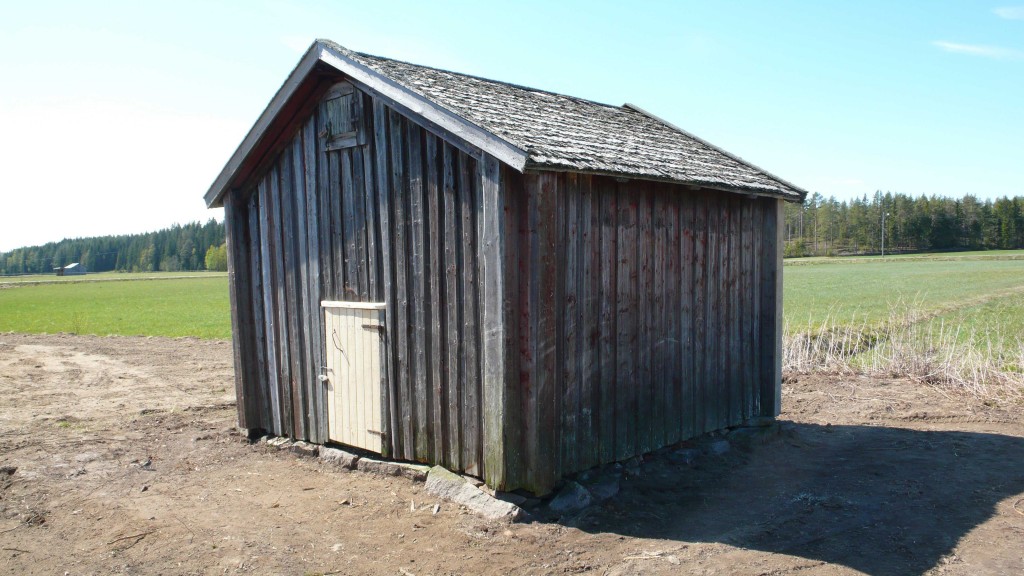 For a long time, log driving in brooks, streams and rivers was the only way to transport logs from inland felling sites to industries located along the coast. In Sweden, log driving was practiced from the early 19th century until the 1980s. In Västerbotten, the practice of log driving ended in the Vindel River in 1976 and in the Ume river in 1980. 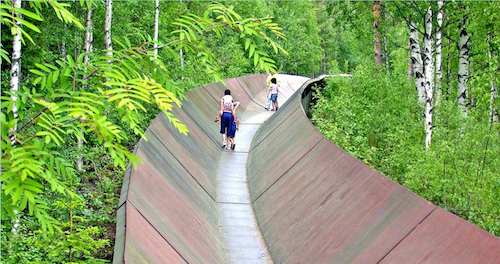 The Klabböle power plant was built by the city of Umeå and was up and running in 1899. It was the first in the Ume River and replaced the steam power plant from 1892 in downtown Umeå. Umeå was one of the first cities in Sweden to have electrical street lighting.

The power plant is still equipped with the original machinery, constructed by ASEA in 1892.

Operations ceased in 1958 when the Stornorrfors power plant was completed.

The artwork symbolises log driving in the Ume River, with symbols of the forest, the log drivers’ hats, boathooks and oars. The piece is untitled.

Umeå Energicentrum is located in Klabböle, a few minutes by car west from downtown. It offers exciting activities, everything from the power plant museum in the old plant from 1899, to an adventure playground, an experimental laboratory and a café.

Read more about adventures and history at Umeå Energicentrum 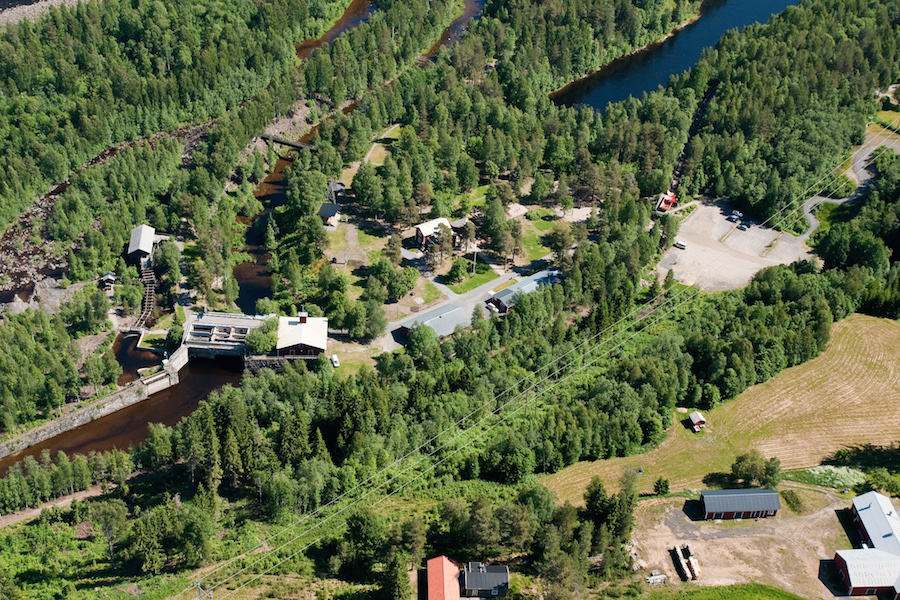