Conflicts about land use for large parts of the town arose between the new townspeople and the soldiers who had settled in Prästbordet. This significantly prevented rapid growth of the town. Only a few houses were built in the allotted area. Most of the merchants preferred to stay in their current homes from which they continued their businesses since they felt the area for the town was too small. By 1589, the residents who built up the new town moved and left their houses empty. Slowly and unnoticed, the town fell into ruin. In 1594, it had no registered residents. The time was not ripe for establishing a town in this part of Sweden.

On 22 June 1622, interim privileges were granted for the city of Umeå. The site of the new town would be Yttersandaslätten or Yttersanda hemman, which was staked out in the spring of 1621 by land surveyor Olof Buréus.

The 16th century stone church and the medieval country road, Häradsvägen, which used to run just south of the church still exist from the Middle Ages. Today the road passes just north of the church.

The parsonage is now located just northwest of the church and at the crest of the hill, where a staircase has also been built to the church.

In the 1760s, the lieutenant residence Axla (Axlagården) was built on an older plot of land. In 1791, county administrative board officer Pehr Forsell built Erlandstorp (Angården).

Axlagården. Charcoal drawing from the 1920s 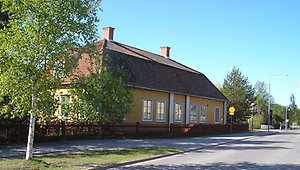 In the 1800s, the parish hall and courthouse were on Västerbacken. A schoolhouse for the parish was also built here, which is known as Klockargården today. Its construction was led by Assistant Vicar J. A. Linder, who also gave Johannesgård, residence of the assistant vicar, its current appearance.

Johannesgård is located east of the parsonage. 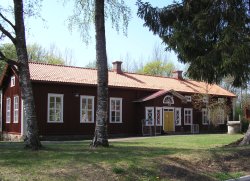 In the early 20th century, there were six church cottages by Kyrkhamn. In 1918, consul Andreas Grahn and his German-born wife Emmy Grahn-Möller moved into the Bösta and Hössjö Cottages, connecting them with new construction. Their cottage later became known as Lillstugan, the Little Cottage. Emmy planted ash, linden, maple, and juneberry trees, as well as silver fir, pine, spiraea and lilacs. A kitchen garden was planted on the north side of Häradsvägen with currants, raspberries and strawberries. In the 1980s, Lillstugan burned down and the garden fell into decline. In 2003, Umeå Municipality restored the remnants of the garden. 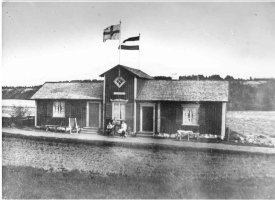