Water was once thought to have healing powers (like the Ganges and Lourdes). Roman baths were built in antiquity. In the Middle Ages, some north-flowing reddish springs were thought to have the power to heal eye diseases and childlessness. The Helgonkällan Medevi acidic spring (discovered in 1678) became a popular mineral spring. People bathed and “drank brunn”, or drank from the springs, while nurturing their health and enjoying themselves. (Source: Medicinhistorisk atlas. University Hospital of Umeå)

The culture of natural springs in Sweden can be split into the less well-known spring-water drinking, and the more formal, and more or less scientifically based mineral-water drinking, introduced in Sweden by Urban Hjärne (1641–1724) in 1678. Health springs popped up in several places in Sweden. Mineral-water drinking and water spas maintained their reputation for nearly 200 years, until about 1870. By then, medical expertise had improved so much that water cures were no longer a leading form of treatment.

One spring by Röbäck was known as early as the 17th century. On Hiske village’s land, a salt spring was described in 1740 whose waters were said to resemble the water of a spa. There were other springs in Baggböle, Piparböle and elsewhere.
The Umeå region had at least five health springs.

Ön mineral spring
Israel Lindahl’s (1718–1793) description of Umeå Parish from 1771 states that “In the village of Ön, just below the city of Umeå, there is a mineral spring. It was discovered in 1767 by local surgeon Olof Littorin, but first came into use in 1770, under the supervision of the current Provincil-Medicini, Doctor Johan Gryselii. Now in the year 1771, there have been 22 guests to the spring. They are hopeful of its positive effects, which are said to be long-lasting.”

In Johan Anders Linder’s (1783–1877) Umeå Parish description from 1857, he mentions “several mineral springs that are used for mineral-water drinking. The most popular, on the shore of Öhn, was first used in 1767 by Rural Barber Surgeon Littorin and was approved shortly thereafter by Provincial Medicus, Doctor Gryselius.”

A spring by Röbäck was known already in the 17th century. On Hiske village’s land, a salt spring was described in 1740 whose waters were said to resemble the water of a spa. There were other springs in Baggböle, Piparböle and elsewhere.

In 1702, Hjärne described the Röbäck spring, known for its health-promoting, iron-rich waters, as “flowing from a beautiful, blood-red sandy ridge.” He also wrote that of Röbäck village’s 80 residents, “eleven had lived to be over one hundred years of age.” He thought this was due to the beneficial effects of the spring’s water. 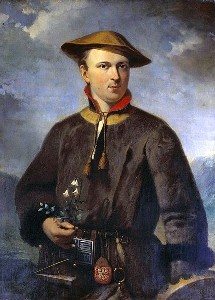 Carl Linnaeus visited Röbäck on his journey to Lapland in 1732 and wrote “Just by Rödbäck is a lovely, pleasant meadow, completely flat. If not of 100s of linden trees (grassy banks). Sylvosa (forested). All alongside the road and river, which flows beside the city of Umeå, runs aqvaea accidulate, and raplene et tunica (acidic water [acidic springs] full of ochre and covered with a silver film). I believe that Rödbäck has taken its name from this red sediment. Beside Rödbäck is the acidic spring, which has ended some lives; it flows from a hill.”

In his 1825 travelogue, Friedrich Wilhelm von Schubert (1788–1856) writes of Umeå: “This city also has a mineral spring by the river shore (by Sjögatan). Above the spring is a wooden building. Otherwise, its mineral content is low, but it is used nevertheless. Each morning, after the drinking is complete, the party walks, as is Swedish mineral spring custom, to the church, and sings one or several verses from the psalm book. A priest reads a morning prayer and then the beautiful mineral spring prayer used in the liturgy, whereupon they sing again and then part ways.”

“Heavenly father, God of our health! You, who permit healing to well up from the earth, so that You shall be praised in Your wonders, have mercy on us, who seek in this region to be healed from our suffering. Think not of our transgressions, but forgive us for our sins. Lord Jesus, You who cured all manner of disease, show us too Your glorious power, so that if it be your will, we will be made whole. But whether You send health or illness, in life or in death, let all of it be in Your honour, in Your honour!

Lord Jesus, be within us a living mineral spring, with rushing waters to eternal life, and gather us at last in the city where there shall be no more death, no more sorrow, and no more pain, for the former has ended.

Groundwater by Röbäck forms part of the Vindel River ridge. The spring was acclaimed already in the seventeenth century as a mineral spring. It was thought to be bottomless and did not freeze in winter.

In 1702, Urban Hjärne found the water to be health-promoting and iron-rich, “flowing from a beautiful, blood-red sandy ridge.” As a student, in 1732 Carl Linnaeus found the water to be acidic, full of ochre, and covered with a silver film. An analysis of the water in 1997 showed that it was suitable for use, with a low pH value and low alkali activity, and a high fluorine content.

Today the water is considered unfit for use.

In 1786, Provincial Doctor Daniel Naezén carried out detailed chemical analyses of water samples from the spring, with very positive results.

“Use of the water is serviceable for Sensible Ladies, who have a faint pulse and poor digestion, and are also weak and cold. It strengthens the whole body, increases fluids and cheers the senses. Consequently, it may be suitable for those with poor regulation, pinkish heat and fluids, a tendency towards vomiting, faintness, heart palpitations, feverishness, numbness, tension, dark and yellowish facial colour, hysteria, rheumatism, gout and rashes. But it is harmful to women with consumption, terrible wounds and swelling, and they should consult with the Doctor before the water’s use.”

In Stockholm, Collegium medicum, the predecessor to the National Board of Health and Welfare, liked and printed the statement.
Source: Medicinhistorisk atlas, University Hospital of Umeå

Between Baggböle and Backen Church was a spring, beside which brass rings and a stone-lined walkway or street have been found.