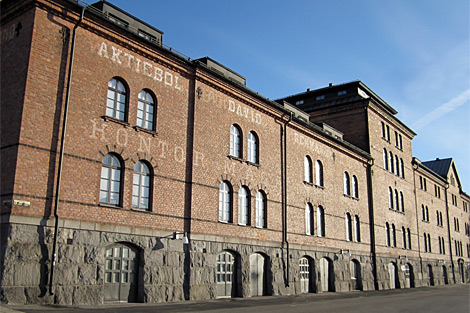 The many individual warehouses and sheds in the harbour area before the 1888 fire were never rebuilt. Instead shopkeepers and the city formed a company that built a common warehouse with a customs house. The building, a part of the city facing the river, acquired a monumental character.

This substantial building made of dark pink brick on a rough-hewn granite base was originally symmetrical, with three pointed sections wings towards the river. After a fire in 1908 the middle wing was transformed into a thick tower and the west wing was removed, an adaptation for the theatre then located on the neighbouring lot to the east.