In the inventory from 1982, Västerbotten Museum identified two areas with buildings of historic value.

Area 1 covers the point at Norrforsen in the Ume River, and continues north just past the railway and the E12. The setting is characterised by old farming communities in an open agricultural landscape. The built-up area has preserved its 1850s character. It is concentrated in the old, dense village centre to the south, and north of the Idebäcken stop. Outside the central area are a few farms on the point, including Norrfors Estate. Despite the loss of buildings and building conversions, the community of area 1 reflects nineteenth-century building styles, with three-building farms and old-type farm houses. This is also true of small barns and sheds, while larger barns have 20th century characteristics.

Area 2 is bordered to the south by the railway and to the north by the road Kassjövägen. It includes the oldest farms in this part of Norrfors. An older farmhouse and several older farm buildings are preserved here. The older built-up area became more built up, especially from 1900.

The County Administrative Board has classified the Norrfors area as a heritage protection site: “This naturally beautiful area of historic value around the Ume River channel, between the Norrfors dam and the Klabböle outlet, contains ancient monuments, authentic farming villages, open farmland, abandoned log driving facilities, sawmill operations, salmon fishing and a power plant and other cultural objects connected to the area’s history.” 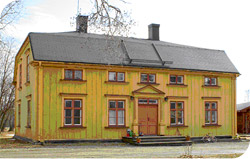