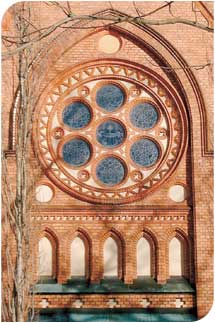 F.O. Lindström based the neo-Gothic Town Church on a plan for a church building developed by Carl Möller, the architect of St. John’s Church in Stockholm. By introducing side galleries, Lindström managed to reduce the footprint of the church, reducing the construction cost. The church has a nave and side aisles of about equal height with transepts. Initially there was seating throughout the nave and no centre aisle. Because of the instability of the steep riverbank, the tower was situated along the northwest side of the church.

In 1937 a centre aisle was created. As part of a controversial 1982 renovation, the church built an addition on the south side of the building partly embedded in the riverbank, redecorated the interior and added a chapel in the chancel.