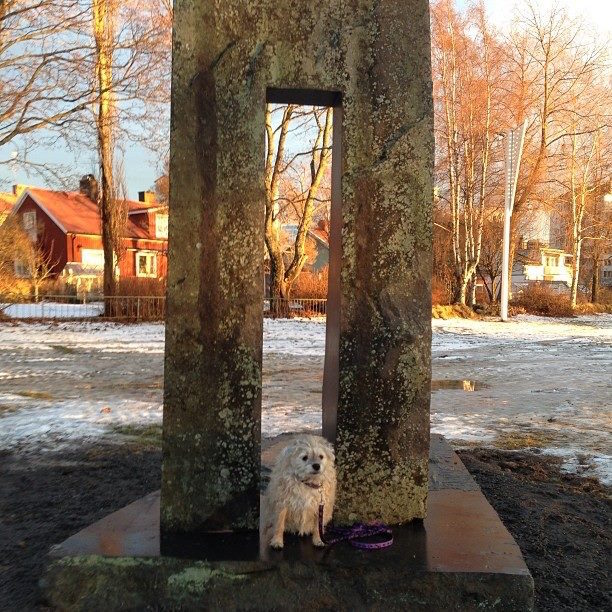 Odelsgutt, a nearly two-and-a-half metre tall sculpture on a square, smooth polished base is situated along Strandpromenaden (the river walk), below the old pulp mill, which is now the Academy of Fine Arts. It is made in black diabase and can be described as a vertical, rectangular block with a cut-out midsection that forms an open gate.

In profile, we see how the sculpture bends slightly backwards and narrows at the top. The short sides, as well as the inner walls of the doorway, are polished smooth in contrast to the raw, rough texture of the front and back. The empty space, the negative volume, creates a passage as well as a landscape picture framed by stone, the positive volume.

The piece is made in the minimalist tradition that became common in public art in the 1980s. At that time, many of our squares and parks began to be furnished with block-shaped, non-figurative and clean sculptures in diabase and granite. Unlike pure minimalism, which never depicted anything but pure form, this work is entitled Odelsgutt, the sole inheriter of the entire home. So – here he now stands, wide-legged and confident, inspecting the land and gazing across the streaming river below. (IT)