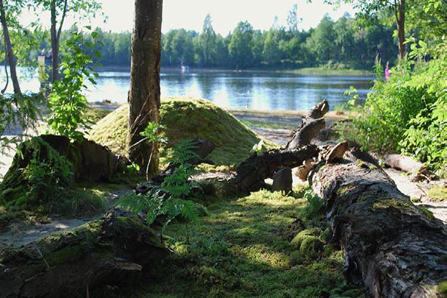 The moss garden (Mossträdgården) was created in conjunction with the Bloom 2014 flower festival. Led by Japanese moss garden master Taka Yuhi, park workers from Umeå Municipality and 10 Japanese garden designers built a miniature landscape of moss along the shore of the Ume River. The result is a Japanese moss garden with Swedish influences. Where the moss garden meets the verdant forest along the river bank on Bölesholmarna, a peaceful and quiet place was created, a place to be in fascinated with nature’s great diversity.

The Japanese moss garden is a unique Umeå2014 project by Svensk Form Västerbotten in close collaboration with Umeå Municipality.

The project was funded by Komatsu City, the EU-Japan Fest Committee and Umeå2014.

The history of Japanese moss gardens stretches back more than a thousand years. The Forest of Wisdom project in Komatsu is an inspiring example of how reverence for nature, developing culture and a modern business community can collaborate successfully.

The name of the moss garden in Umeå emphasises the friendship between the two cities:

Two designers, John Astbury and Kyuhyung Cho, designed benches for the moss garden in Umeå that poetically and practically interpret the concepts of rest and timelessness.

Development of the moss garden

In 2016, the municipality took several steps in developing the park. Some examples include a bamboo fence framing the moss garden, the addition of new moss, and the installation of a bench.